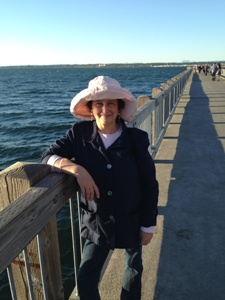 With a gift from Elise and her husband Stephen Partridge, and contributions from their friends and family members, the BCCF is establishing the Elise Partridge/Liz Dohan Fund to support the work of Patient and Family Counselling at the British Columbia Cancer Agency(BCCA)

Elise Partridge - Elise died peacefully on January 31, 2015 in the Palliative Care Unit at Vancouver General Hospital. She was 56. Her husband Stephen; mother Marjorie Tompkins; brothers Tim, Fenton, and Kirby; extended family; and many dear friends will always hold Elise close to their hearts. Elise was the author of three books of poetry, including The Exiles' Gallery, which was completed as she fought her second cancer and which will be published in April. atwww.elisepartridge.org.

Elise was diagnosed with breast cancer in April 2001, and after surgery was treated at BCCA and then lived cancer-free for many years. Her first book of poems, Fielder’s Choice, published in 2002, consisted mainly of poems written before her diagnosis but included a few that reflected it. In the years following, she wrote a number of additional poems about her experience of cancer and its aftermath, including some about other survivors of breast cancer. These were published, along with poems on other topics, in Chameleon Hours (2008). In early 2014 Elise was diagnosed with a second, unrelated cancer, already metastatic; she underwent surgery and was treated for many months at BCCA, but died on Jan. 31, 2015. Poems in her third book, The Exiles’ Gallery (2015), were largely complete before her diagnosis; in her final year she revised these and wrote new poems, some of which reflect her second diagnosis, and prepared the book for publication.


Liz Dohan worked for many years as a social worker at BCCA. In early 2001, Liz perceived the need for a support group devoted specifically to younger women (generally under 40) with a diagnosis of breast cancer. Shortly after starting this group, Liz met Elise on her first day of chemotherapy at BCCA and invited her to join. Like others in the group, Elise found that discussing issues specific to women her age (and often younger) eased the anxiety and sense of isolation that resulted from her diagnosis and treatment. Members of the group formed strong bonds, and socialized outside the context of the regular meetings with Liz. When Elise learned that her husband Stephen’s young colleague in the UBC English department, Gabriele Helms, had been diagnosed with breast cancer, she suggested that Gabi join the group. At Gabi’s initiative, and with Liz’s support, the group soon began to plan the first-ever national conference for young women with breast cancer. Along with Gabi, Elise was one of the primary organizers of the conference, called The Young and the Breastless; her particular responsibility was for publicity, where she was able to draw on her writing skills. This conference, held on the UBC campus in May 2004, was attended by women from virtually every province as well as by some from beyond Canada, and included lectures, panels, and workshops addressing every aspect of breast cancer. The conference was followed by an increase in the number of specialized support groups, including online, and a greater awareness of the particular needs of younger patients. The PYNK centre, founded in Toronto in 2008, is devoted specifically to treating younger women with breast cancer, and in 2012 there was launched a major Canada-wide initiative for medical research on the treatment of breast cancer in young women.

Liz and Elise became closer still in the years following the conference and although retired by then, Liz was especially supportive of Elise in her second battle against cancer.