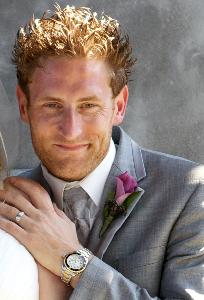 Daniel Snell will be remembered for his strength, infectious smile, engaging personality, and his insatiable appetite for candy and sushi.

On May 18th 2020, at the age of 43, he succumbed to an aggressive form of cancer which he fought courageously for just over 7 months.

He leaves behind his beautiful wife Tanya and their 6-year-old son Maximus. Their loss and grief are shared by his parents Ann and John, his siblings Anthony and Joanna, and a lengthy list of extended family, in-laws, friends, and work colleagues in Canada and his grandpa Snell, together with many uncles, aunts and cousins in England.

Daniel was born in Southampton, England, and emigrated with his family to Canada in 1982, settling in Kelowna BC, before moving to Vancouver, his home for over 30 years.

Daniel captured the hearts of many with his piano playing. He had the magical talent to play by ear and always seemed able to find an abandoned piano and spontaneously entertain the passers by that were captivated by his free spirit.

Daniel had many passions in life, but his most prevalent core values were family, socializing, being active, and the great outdoors. His people skills were extraordinary and folks of all ages would warm to his charm and charismatic nature.

Sailing, windsurfing, kayaking, scuba diving, biking and snowboarding, were all high on his activity list, and you could bet Elton John or Cold Play could be heard in the background.

Music was also likely heard in the background while he studied and developed academically. Daniel became qualified to pursue a career in Civil Structural Engineering, which was to become his second home. He had a natural flair for auto-cad, technical drawing and design and had just taken on the role as Discipline BIM Specialist. He poured himself into work and thrived on complex projects and tight deadlines, yet always found time to help a teammate.

Even at work, Daniel was always the devoted father and the idolization of his son Maximus is a legacy that will endure. The outpouring of compassion and respect shown toward Daniel since his passing has been both overwhelming and humbling. It provides solace to those he left behind and bears testament to his legacy.

The memory of Daniel is etched in our hearts. He is loved, will always be missed but never forgotten. May he Rest in Peace.

A celebration of life will be held once restrictions have eased and Daniel can have the gathering of family, friends and colleagues that he deserves.