SUPPORTING RESEARCH FOR PEDIATRIC AML IN BC 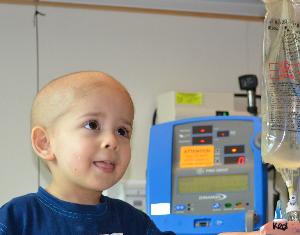 
Theo was diagnosed with Acute Myeloid Leukemia, a rare and aggressive form of childhood blood cancer, on Dec 20, 2011 just after his second birthday. Our family moved to Vancouver as Theo had to receive treatment at BC Children’s Hospital for the next six months. Theo’s immune system was extremely compromised and exposure to any infections could prove life threatening. This meant that he spent most of his hospital time in isolation.

After his treatment, he went into remission, but not long after we were home, he relapsed. In January of 2013, we moved back to Vancouver and Theo started treatment again, which included a Cord Blood Stem Cell Transplant at the age of three.

Theo started a new course of chemotherapies to destroy his current bone marrow so that a new immune system could be introduced. Therapies used to treat AML had terrifying potential side effects including secondary cancers, organ damage, and death. But, because of the aggressive nature of his cancer, we opted to accept the risks, hoping that these therapies will increase his chance of survival.

Theo had the transplant in April of 2013. It has been 7 years now since transplant. We are now considered long term follow-up and only need to do blood checks once a year. His oncology team will continue to monitor him for potential relapse and long-term side effects until he is 18 years old.

We are so grateful to the researchers that are trying to develop better treatments that increase survival rates and reduce long-term health risks. I have seen firsthand the devastation this disease causes to children and their families, advancements in research need to continue.