My hair to help save lives 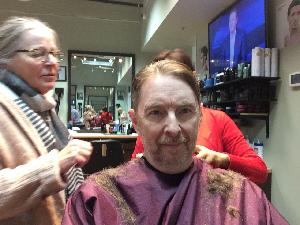 THE BEGINNING OF MY STORY:

It all began about three and half years ago, in the Summer of 2015, as my birthday approached. My wife observed that my hair was getting a little long and made me an offer. She would take me to her hairdresser to get it tidied up as a birthday present. I was, admittedly, looking a bit like a shaggy dog.

After a few snips, I looked on the floor and remarked, “Hmmm… nice looking hair for 60, or so.” The hairdresser’s reply, “If you had a foot of it, you could donate it.” Without further thought, I said, “That sounds like a great idea, I’ll do it.”

This wasn’t as simple as I thought. In the months to come, I would have to endure a bit of hair hardship as my hair grew out.

What were my goals. First, my foot of hair would be turned into a wig for a cancer patient having lost their hair through chemotherapy treatments. Second, a fundraiser, so I registered on the BC Cancer Foundation website. Third, to challenge other men to attempt this sort of project.

OK you folks, I’ve done my part, so you can do yours—DONATE! See the end of this story.

I would need at least a foot of hair, or more if I wanted some hair left to style. I never considered the months I would have to endure the discomfort of my hair flopping in my face because it was not quite long enough to tie back in a ponytail. But I knew it would all be worth it eventually. My kids, actually young adults, suggested a man bun. Absolutely not, was my return on that one. My daughter kept wanting to braid it and successfully did start by sneaking one time up while I was preoccupied. I attended a wedding wearing a head band and endured being called Willie Nelson, Bijorn Borg, Tonto, etc. “All for a great cause,” I said to myself.

My hair did finally get long enough to make a ponytail, which I fastened back nervously at first. I also got used to living my life looking a little like an aging hippy. In fact, I got to enjoying my hair. I was different and I got to tell a story.

The first hairdresser, who suggested the hair growing idea, left the salon, so I went and saw a master designer at the salon who explained a bit more about the process to me. You see, I was getting nervous, almost shocked at the amount of hair that was coming out when I washed or brushed. I was making rough calculations in my head and beginning to worry that I would have little left to donate in the end. I was reassured that the human head can lose 50 to 80 strands of hair each day. The good news is that new hair grows as the old hair is lost. That is why I would need extra length. Some hair, the newer hair, would be behind and thus shorter. Without growing the extra, only a portion of my hair would be usable. Apparently, I was on target and getting close to cutting it off. But frankly, I’m pretty sure there were days I lost many more than 50 to 80 strands of hair.

THE FINALE OF MY STORY:

A year ago, Fall 2017, I was talking to a lady about my attempts to get going at organizing my big chop. The thing is, I really wanted to have photos and a video and I needed someone to do these at the time that I could arrange an appointment for the cutting. The lady calmly said, “You know, it is amazing how much warmth you get from your hair. If you cut it off now, you will be cold during the winter.” That solved it. I would do it in the Spring. Whew! Stress attack over.

Yup, I got very long hair. Spring came and I also got busy. Summer turned to Fall and Winter was on the horizon. I really needed to get on with the final leg of my journey. I had been experimenting with doing iPhone selfies and decided that the photo and video documenting I could do myself. My son was going to my old barbershop, The Village Barbers in Lynn Valley Mall, North Vancouver. He suggested I go to talk to Trudy who was now cutting his hair. I did and she did and the job was done. It was all so easy and stress-free. In no time I had the haircut I always wanted, but never knew how to exactly describe.

Next I had to donate my hair. A hair salon often cuts women’s long hair and can send it in for donation, but this is rare for men, so barber shops don’t do this. My hair was handed back to me in a plastic bag. I looked back on the BC Cancer Foundation website and discovered Eva and Co. Wigs. In contacting them, I also discovered the BC Children’s Hospital Foundation program called Wigs For Kids. My wife, who has worked with kids for decades, had always maintained that my hair should go to children. Everything, all the pieces, all the strands, were falling into place.

It’s a project that has been ongoing for long over three years. I have written the story on myBobLog, on my BC Cancer Foundation Fund Raising page and on my Wigs For Kids donation page.

Cancer touches everybody’s life in some way. If you haven’t got or had cancer, you surely know somebody who does, or has had cancer. You can help with the ongoing efforts to fight cancer through research. I spent years growing, and have now donated, this long grey-less hair of mine for someone with cancer who has lost their hair due to Chemotherapy treatments. Yup, believe it or not, no grey at my age.

Now is the time! Christmas will be arriving before we know it, so make a great donation. Perhaps someone will get my hair as a Christmas present.

I would like to appeal to you for a donation to one or both of the foundations. That's right, cough up your cash for cancer at Christmas. Not only that, I'm daring you to double your donation by giving to both foundations.

Thank you so much!

P.S. – If you have already contributed to my campaign, I thank you.

To make a donation online, please use the links to my personal page below. A tax receipt for the full amount of your gift will be issued by the BC Cancer Foundation, or the BC Children’s Hospital Foundation — Wigs For Kids (Please visit my website for a link to that page).

Please make sure you take some time to visit my blog website. There you will find many photos and a YouTube movie I made which includes some musci with my band.

On November 29th, I finally took my hair to donate. I turned into the driveway for BC Children’s Hospital and was immediately struck by how massive the complex is. BC Women’s Hospital and GF Strong Rehabilitation Centre are both there. I felt like they could do anything at this place. I easily located building 18, entered and walked up to the first receptionist I saw. I explained my task and found that I was in exactly the right place. Taking one final look at my hair, I handed it over. The lady gave me a big thank you. Then I departed.

As I was leaving I realized I was experiencing a rather peculiar feeling. I felt that I had left a part of me behind. I suppose it is actually difficult to explain and put into words. “It’s only hair!” I said to myself. “It will grow back. What about those people who actually donate an organ? What must it be like for them?” It was then that I recalled hearing something on the radio about a bone marrow transplant. It was a “textbook match.” The donor and recipient commentated that it was like they had become family members.

I don’t know if I could donate a body part by going trough surgery. Maybe to a family member. At least I have sampled, if only slightly, what it is like to give a part of myself to another person.

The BC Cancer Foundation is the bridge that connects philanthropic support and research breakthroughs in cancer. As the fundraising partner of the BC Cancer Agency, and the largest charitable funder of cancer research in this province, they enable donors to make contributions to leading-edge research that has a direct impact on improvements to cancer care for patients in B.C.

Your gift is appreciated and will make a huge difference.

Thank you for your support.