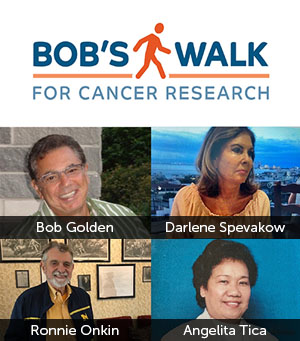 At 9 am on Saturday, June 25th, Gary Averbach (in his 80th year), will embark on a solo trek from Calgary to Vancouver, walking 25-30 km per day with the goal of raising awareness and funds in support of research and care at BC Cancer, in memory of his cousin, business partner and friend, Robert (Bob) Golden. He will also be walking in memory of his cousins Ronnie Onkin, and Darlene Spevakow as well as long-time beloved Housekeeper, Angelita Tica, all three of whom died from this insidious disease within a 7-week period from April 5th to May 18th of this year.

The walk will begin at Olympic Park in Calgary and end sometime in August, at Jack Poole Plaza in downtown Vancouver.

Follow Gary's Journey
For progress and daily updates, copy and paste this link in your browser:
https://www.polarsteps.com/GaryAverbach/4997408-bobs-walk-for-cancer-research

Donations may be directed to research for the following cancers:
• Chondrosarcoma (Bob),
• Lung Cancer (Ronnie),
• Pancreatic Cancer (Angelita),
• Liver Cancer (Darlene),
• or to the Urgent Needs at BC Cancer (general cancer research)

Full of life until the very end, Bob’s dignity, courageousness, and love for family and friends filled his life, especially in his last months.

Through his many years in retail, followed by 15 years working alongside his cousin Gary he helped steer Belmont Properties to new heights.  Bob was driven to do the best and be the best.

Bob’s large circle of family and friends can attest to his passion for all things wine, all things jazz, and of course, all things on his barbecue.

Bob married Dana, the love of his life, in 1979 and they raised three boys, Aaron, Adam, and Jeremy, through his times working in Quebec and Ontario and finally returning to Vancouver in 1995.   He then spent almost twelve years working for Future Shop and Best Buy until he took on his father Sid’s role in Belmont.

After being diagnosed with chondrosarcoma in January 2021 he was determined to contribute to the research associated with treating the disease that would ultimately claim his life.  In Bob’s final days, he spoke passionately about saving others from this horrific disease.  And so, on the last afternoon of his life, he asked his cousin Gary Averbach to dedicate his ‘bucket list’ walk to cancer research and so was born ‘BOB’S WALK FOR CANCER RESEARCH”

Born and raised in Detroit Michigan, Ronnie was an only child and perhaps because of that, was always very attached to his extended family in Canada and the US.   Shortly after receiving his MD in 1964 at Wayne State University and his credentials in Psychiatry at the University of Southern California in 1968 he served 2 years as Chief of Psychiatry USAF in Bangkok, Thailand during the Vietnam War.

In 1970 he opened the private practice of Psychiatry in the Los Angeles area which he continued till the last weeks of his life.  But over and above his professional life, Ronnie loved his Detroit Tigers, NFL football, and in fact, all pro sports.  Until his early 50’s he enjoyed a frenetic bachelor’s life and he was in his 60s when he finally married Iris in 2000.  In 2002 he became a father to Benjie.  Their lives revolved around raising Benjie, an active social life, and a thriving practice for the next 20 years.

In 2004 Ronnie was diagnosed with Lung Cancer and thanks to intensive chemotherapy, he had been in remission until the early summer of 2021.  At that time his Lung Cancer returned and sadly, in spite of massive chemo and being a guinea pig for new drugs, he lost the battle and passed on April 3rd.

Angelita was born and spent the first 45 years of her life in Camarines Sur, Philippines.  She was married to Fortunato and already the mother of three children when, in 1997, like her sister Maria five years previously, she came to Canada on a work permit as a domestic worker.  Three years later, on receiving her Permanent Residency, she sponsored her husband and subsequently her children to join her in Vancouver.

Along with her sister and her sister’s family, she used every bit of her set aside money to purchase an up and down duplex on Fraser Street to make a home for her family.

That same year she answered an ad for a live-in housekeeper at the Averbach home on Point Grey Road.   Therein began an almost twenty-year relationship with Gary and Diane Averbach.   While working and living in the Averbach home for five days a week, and doing part-time cleaning jobs on the weekend, she made sure that every one of her family was gainfully employed and contributing to the Tica family’s maintenance.

In December of 2018 she was diagnosed with Pancreatic Cancer and, although she continued working for another year, ultimately the strong radiation and chemotherapy made it impossible for her to continue that routine.   But for another year and a half, she fought the disease eating away at her body until finally she could fight no longer and she passed on April 22nd.  Angelita’s family took her body to the Philippines where, in the Filipino tradition, she was buried near the place where she was born.

Darlene was the only child of Earl and Jenny Lohn born in November 1942 shortly after Earl had left to fight in the Canadian Army.  She grew up and lived her whole life in Vancouver, marrying Bob Spevakow in 1962.  Bob was a pharmacist and for many years operated his drugstore in Burnaby’s Middlegate Mall.

Darlene and Bob raised three children – Shelley, Mark and Jayson – while living an active social life with many close friends and family.   They had three grandchildren, one of whom, is due to be married this summer, an event Darlene would have so wanted to attend.

Cancer played a tragic role in Darlene’s life, losing a treasured friend while still in her 40’s followed a few years later by the loss of her mother to lung cancer, (in spite of never having smoked), and most tragically, she lost Bob to Pancreatic cancer early in 2018.  Shortly after that tragedy, she developed colon cancer but successfully fought that off and was in remission when she met Herb Loomer with whom she had become close.

But once again cancer, her bitter enemy, returned.  This time the insidious disease came in the form of liver cancer and sadly, on May 11th, it took her life.